Green ammonia – the energy source of the future

Ammonia is best known for its role in industrial fertiliser. It may also be the key to a low-carbon energy system.

Ammonia is more than just a buil­ding block for indus­trial ferti­liser – it’s also an energy source. This isn’t science fiction! There were ammonia-powered street­cars in New Orleans as early as the 19th century and buses that ran on ammonia in Belgium in the 1940s. The gas could even be used to fuel the 1981 Chevrolet Impala, a passenger car manu­fac­tured in the US. In the future, ammonia will prima­rily be used in ships. It’s extre­mely important to develop alter­na­tive fuels for ship­ping, because the fuel that has so far been the most widely used, heavy fuel oil, is also the fuel with the worst effects on the climate. The combus­tion of ammonia, on the other hand, doesn’t produce any air pollut­ants; it only produces nitrogen and water vapor.

Ammonia is one of the most widely produced basic chemi­cals in the world. Its chemical formula is NH3, which means that it consists of one nitrogen and three hydrogen atoms. In the most commonly used produc­tion process, the Haber-Bosch process, the gases nitrogen and hydrogen react under high pres­sure (150–300 bar) and high tempe­ra­tures (400–500 °C) on an iron cata­lyst. The chemical equa­tion for the reac­tion is N2 + 3H2 → 2NH3. But this process, which was deve­loped at the begin­ning of the 20th century, is harmful to the climate: the reforming reac­tion used to produce hydrogen from coal or gas releases green­house gases.

Hydrogen can be produced in a climate-friendly way through elec­tro­lysis, with the electri­city needed for the process gene­rated from rene­wable ener­gies. This process first splits water into oxygen and hydrogen. A cata­lyst is then used to split nitrogen mole­cules into nitrogen atoms, which react with the hydrogen to form NH3. Although this process is climate-friendly, the produc­tion costs are rela­tively high. The CAMPFIRE project is testing a new method to produce green ammonia from wind and solar power. This process uses ceramic thin-film membranes to synthe­sise NH3 directly, which incre­ases effi­ci­ency and improves cost-effectiveness.

Compared to carbon-based synthetic energy sources like methane or methanol, nitrogen-based green ammonia has a key advan­tage: nitrogen is the main compo­nent of the atmo­s­phere, accoun­ting for just under 80%, while carbon is present in the air only in the form of carbon dioxide, which accounts for as little as 0.04%. Compared to pure hydrogen that has already been lique­fied, liquid ammonia offers the advan­tage of a higher energy density: it contains 50% more energy per cubic metre of volume. Because ammonia lique­fies at 33°C rather that at 253°C, it is also easier to store and trans­port. The consor­tium is deve­lo­ping important rese­arch inter­faces across the board for a future ammonia ecosystem that encom­passes the complete genera­tion, logistics and recon­ver­sion chain. Inno­va­tive CAMPFIRE power-to-ammonia and ammonia-to-power tech­no­lo­gies, refu­el­ling tech­no­lo­gies, and logistics and infra­st­ruc­ture concepts can over­come some of the most signi­fi­cant remai­ning obsta­cles to the green hydrogen economy of the future. 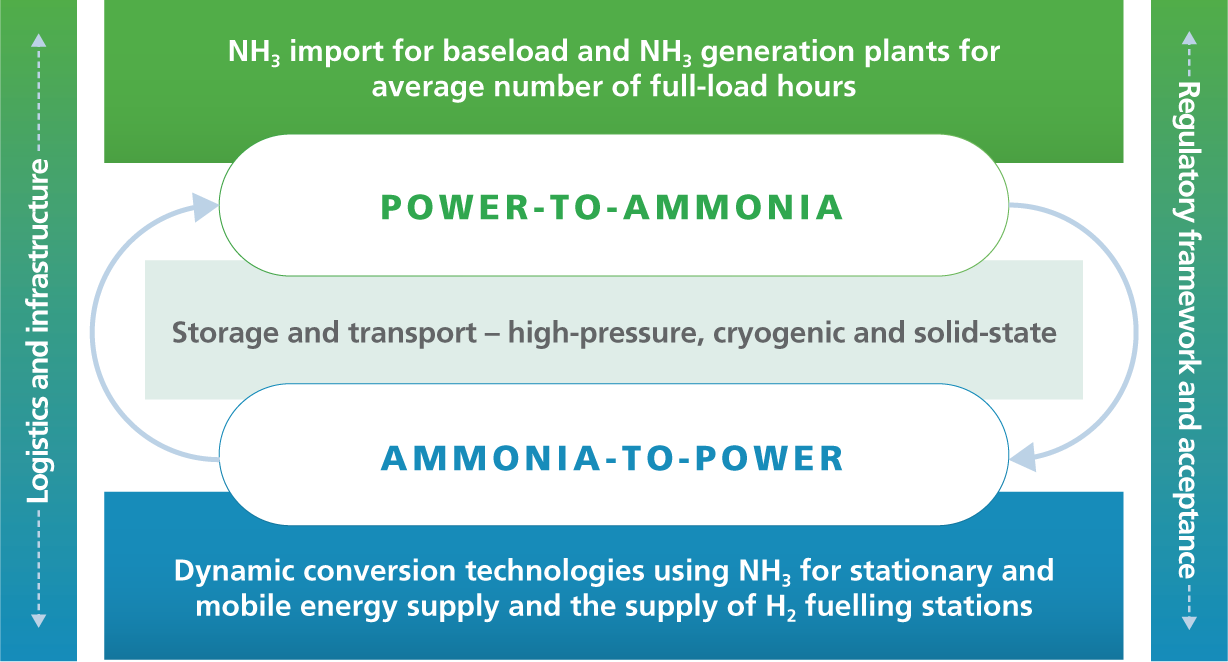