Green ammonia – the energy source of the future (part two)

Amid the hype around green hydrogen, ammonia (NH3) is quietly emerging as another promising prospect for generating a storable energy carrier with the help of electricity from wind energy and photovoltaics. German industry has more than 100 years of experience in the production, storage and transport of this gas.

NH3 is an effi­cient medium for hydrogen storage. The hydrogen content of ammonia (108 g H2/l) is compa­rable to that of methanol (CH3OH). Unlike carbon-based energy carriers, ammonia can be produced without CO2, a gas that is present in the atmo­s­phere at low concen­tra­tions. Compared to pure hydrogen, NH3 has the advan­tage of a signi­fi­cantly higher energy density per unit volume. Although H2 has the highest energy density per unit mass of all fuels (33.3 kWh/kg), ammonia has a signi­fi­cantly lower heating value, at 5.3 kWh/kg.

In prac­tical appli­ca­tions, however, it is the volu­metric energy density that is most important – and, for hydrogen, this value is extre­mely low (0.003 kWh/l) at atmo­s­pheric pres­sure. The energy density of liquid hydrogen is also very low (1.4 kWh/l), but this requires a pres­sure of appro­xi­mately 700 bar. The volu­metric energy density of liquid ammonia, on the other hand, is 3.2 kWh/l at a pres­sure of only 8 bar. This means that the amount of energy required to compress ammonia for lique­fac­tion is much less than is required to compress hydrogen. However, since ammonia has a rela­tively low energy density compared to carbon-based liquid fuels (diesel: 9.9 kWh/l), it is mainly suitable as a fuel in ship­ping, rail or avia­tion vehi­cles, and for use in statio­nary energy supply systems. 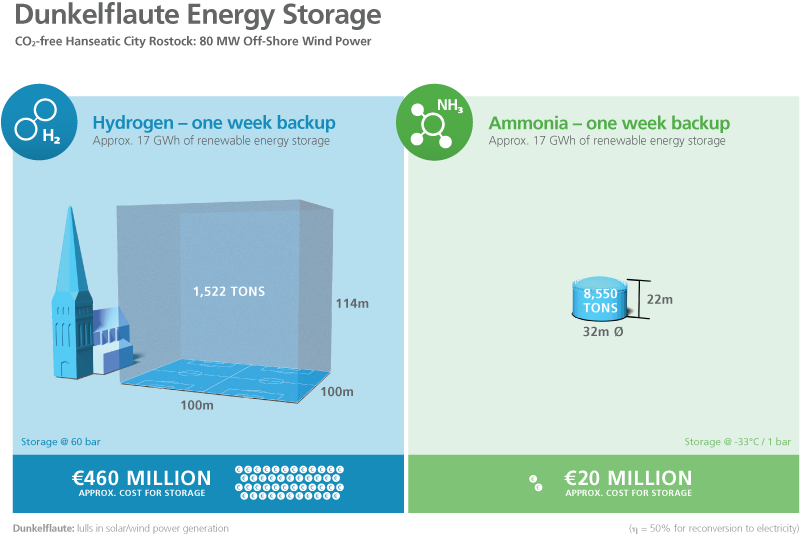 Ammonia is most commonly synthe­sised using the Haber-Bosch process, which involves several steps. First, mole­cular nitrogen must be obtained from the air, and the bonds between paired nitrogen atoms must be broken up in the high-pres­sure reactor (the ‘Haber-Bosch reactor’) using a cata­lyst under high-pres­sure and high-tempe­ra­ture condi­tions. Hydrogen is then produced from water vapor before under­going a chemical reac­tion with nitrogen in the Haber-Bosch reactor to form ammonia. The energy required to produce hydrogen is mainly supplied by fossil fuels (for example, from natural gas via the process of steam reforming), which makes the process harmful to the climate and accounts for the roughly 3% of global CO2 emis­sions gene­rated from ferti­liser produc­tion. A ‘green’ alter­na­tive is to obtain hydrogen from the elec­tro­lysis of water vapor. If the energy required comes from rene­wable sources, the proce­dure is climate neutral. However, to be econo­mi­c­ally viable, current Haber-Bosch processes must operate conti­nuously with a base load of at least 50%.

CAMPFIRE is deve­lo­ping load-flexible Haber-Bosch processes based on micro­st­ruc­tured reac­tion tech­no­logy, new cata­lysts, and inno­va­tive plant concepts so that, when fluc­tua­ting rene­wable energy is supplied, ammonia can be synthe­sised effi­ci­ently using hydrogen from elec­tro­lysis even at low base loads of 5–10%. Load-flexible Haber-Bosch processes can be used for on- and offshore storage of rene­wable energy. CAMPFIRE part­ners are also explo­ring a new possi­bi­lity: a process that can produce NH3 directly from elec­tro­lysis. This means that the first step of hydrogen produc­tion can be skipped, and ammonia is produced directly from water and nitrogen in the air. In solid state ammonia synthesis (SSAS), water vapor reacts with ammonia at the cathode to produce ammonia. As a result, green ammonia can be produced parti­cu­larly effi­ci­ently and in large quan­ti­ties from wind or solar power.

Finally, in order to prepare the green ammonia for use as a fuel or convert it to mole­cular hydrogen, it is split back into hydrogen and nitrogen via an ‘ammonia cracker’. This conver­sion can take place either on shore or on board a ship. In the combus­tion engine, a mixture of ammonia and hydrogen provided from the cracker is used for an effec­tive emis­sion-free combus­tion process. A polymer-based fuel cell (polymer-exchange membrane fuel cell (PEMFC)) uses hydrogen produced in the cracker aboard the ship to gene­rate energy for propul­sion. The CAMPFIRE part­ners are deve­lo­ping highly dynamic ammonia crackers with an inte­grated step for fine hydrogen puri­fi­ca­tion. Pure ammonia is converted into electri­city in high-tempe­ra­ture solid oxide fuel cells (SOFCs). In the CAMPFIRE projects, the focus in this area is on the deve­lo­p­ment of cost-effec­tive cell concepts and synthesis processes that would lower the cost of SOFCs for high-output classes. 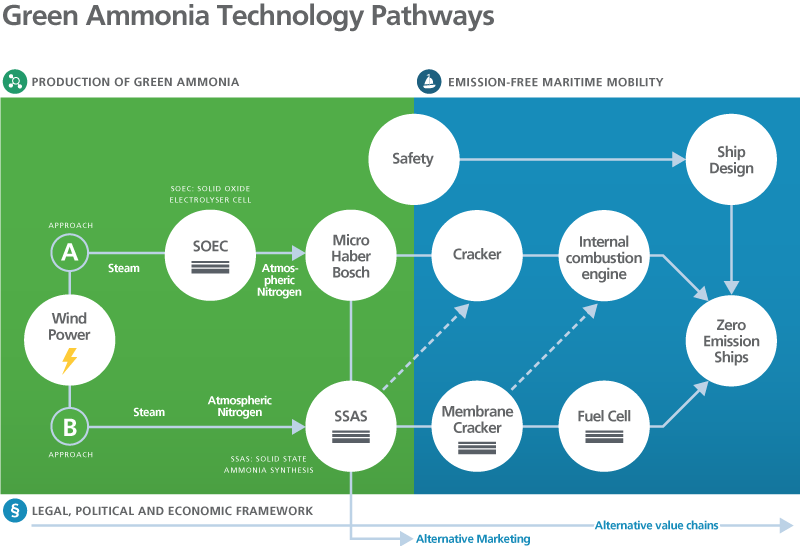 For the deve­lo­p­ment of future trans­port chains based on green ammonia, CAMPFIRE is deve­lo­ping solu­tions for flexible, auto­no­mous and emis­sion-free refu­el­ling systems – for ship-to-ship, land-to-ship and lorry-to-ship. The refu­el­ling process must be feasible at diffe­rent pres­sure and tempe­ra­ture levels. For hydrogen end users, ammonia-powered multi­modal refu­el­ling stations with adapted ammonia crackers and hydrogen fine clea­ning modules are being deve­loped to supply land-based consu­mers (cars, trucks, lorries, trains). For statio­nary energy supply, ammonia can be used directly in moto­rised combined heat and power (CHP) systems. For this purpose, CAMPFIRE is adap­ting the combus­tion process in CHP gas engines for hybrid opera­tion with the cracker. 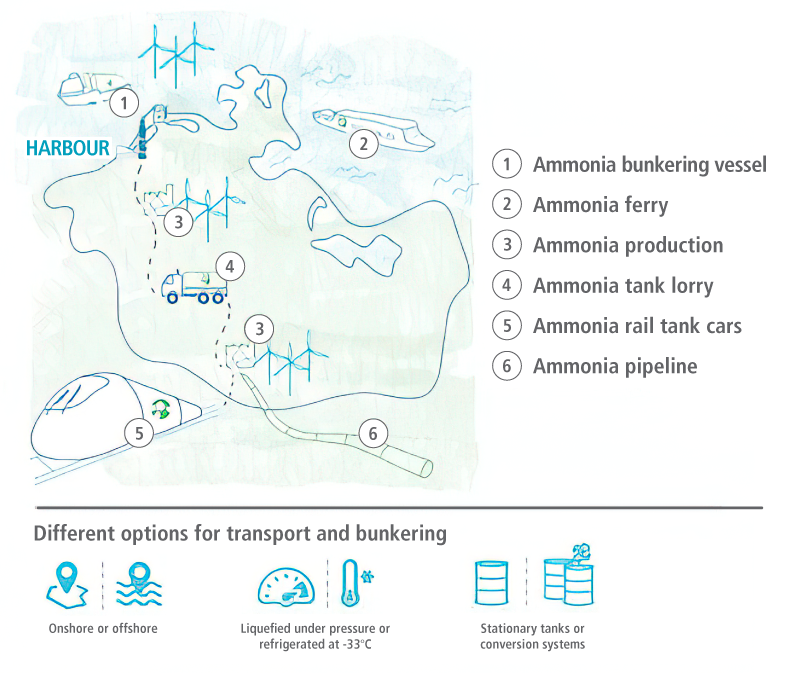